My wife recently showed me this little “Disapproval Matrix” (source) (update: this matrix originally comes from Ann Friedman) because she thought I might like it for the blog. 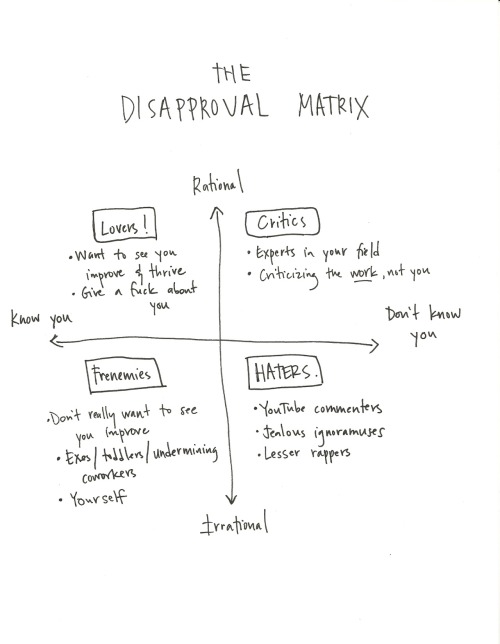 Dani and I talk a lot on the blog about what opinions are worth paying attention to, and which ones aren’t, and I thought that this was very interesting along those lines, as a visual way to conceptualize who we wanna listen to.

Of course, once you start interacting with lots of people in a profession, you learn that many scholars and critics and practitioners are far less rational than one might have hoped.  They tend to “critique” certain ideas or scholarship  or practices because it conflicts with their own cherished views of the world and what they deem to be correct; or the have personal slash professional ego investments in certain ideas which blinds them to the evidence contrary to their ideas; and because of this, they’re prone to avoid following the evidence where it leads, which tends to put them more in the irrational camp. These folks are difficult precisely because they present themselves as rational critics. So with that caveat I think this is a really great chart.

Filed under Education, Library Instruction, On Being Human, Posts by Kevin Michael Klipfel, The Library Game

2 responses to “The “Disapproval Matrix””