Why Even Bother With the Library?

My job has me working lots with first year students and I’ve been in heavy-duty instruction mode the past couple weeks working with large numbers of students new to the university. The sessions tend to be the usual stuff: developing inquiry questions, evaluating information, and maybe a little bit of searching. One thing I notice myself doing more and more, though, is trying to create a problem context where I organize the session around an intellectual problem that ultimately leads to (I think) an interesting answer to the question, “Well why even use the library at all?”

Why do I do this?

For one, of course, we’re always, at some level, trying to figure out a way to explain to students new to the university why Google will ultimately fail you in some sense if you’re doing serious academic research.  Framing your session in a way that answers this question while still focusing on the specific content you’re focusing on, then, at the end of the day, seems valuable.

Before I get into the nitty gritty – talking about popular sources or scholarly sources or research as authentic inquiry or anything like that, I’ve just been asking students this very general question. I have a slide that says “Central Question” at the top. It has one bullet on it. It says “How do I know what information I should believe?” The design of the slide is not very interesting.

Since I’m an enormously helpful, affable fellow, I might even say things like, “You’re exposed to all kinds of stuff everyday – information from, like, CNN, Fox News, stuff your friend says to you at a party, stuff your uncle tells you at a wedding, things you read on blogs or in US Weekly or on TMZ – how do you guys go about figuring out, on the one hand, “This is something I”m going to believe, but this is something that seems like I might be skeptical about?””

The fascinating thing is that students already know the answer to this question. In every single class I’ve taught the past couple weeks where I did this, someone ends up saying something about “reliable sources.” I might ask them what they mean and they say something like “Well, like, people who know stuff. Experts. People who know a lot about the topic.” Some even say, “People with PhD’s, like a Phd in political science if they’re talking about politics.”

This is, more or less, exactly where I”d go with such a discussion, but it’s really interesting to see this play out in a way that’s really self-generated by the students. A nice upshot, too, is they end up seeing how intuitive the idea is that we want to believe stuff based on evidence and expertise. One example I’ll often trot out at this point is that there’s lots of expertise that we commonly recognize, and the nature of that expertise is a based on high degree of factual knowledge and the evidential standards of a given field. For example, if you break your leg, I say, you don’t want to come to me to fix it – I have no idea what to do other than to mangle you Anse Bundren style – instead, you want to go to a medical expert, a doctor, i.e., someone who has a firm grasp of a large body of factual knowledge and evidence regarding the practice of medicine and the practical wisdom to apply it. Similarly, if your car breaks down, you want to go to an expert on cars – a mechanic, because they have the kind of expertise and knowledge of the right facts in that particular domain. So, you see, I say, the stuff we believe works the same way: if you’re trying to figure out the facts about the water shortage in California, say, you want to figure out who has the most knowledge about that, and seek out their opinions. (Cf. Socrates’ 90,000 examples of horsetrainers and expertise in Plato’s dialogues to demonstrate what would give someone expertise in moral matters).

Here I find to be a useful place to introduce the popular vs. scholarly distinction since, in effect, we’ve already been talking about the deep structure of it, anyway. One of the main reasons I do this is not just to talk about the surface characteristics of popular vs. scholarly sources – but so students can see, clearly, why exactly scholarly articles are written by experts (peer-review) and why, exactly, these articles are all about evidence (anytime they make a claim they rock a citation that allows you to check up on their evidence). So at bottom it’s not really about who wrote it. Rather, it’s that experts do something special: they based their beliefs, in so far as possible, on facts rather than opinions, on evidence rather than conjecture.

This introduces what I think of as the “threshold concept” of evidence: that (1) You want to base your beliefs off of the best available evidence and (2) this is what you want to do in your own research – when you make a claim, you want to cite good evidence in favor of what you’re saying. That’s the expectation that our college instructors have and what makes us, in effect, educated people vs. people just saying stuff. And this is why you use the library: because that’s just where you’re going to find most of the information based on the best available evidence.

In my experience, talking to students this way about information as evidence for claims really does change the way they think: about research, about the information that’s out there, why they use the library and – most importantly I think – by giving them a concrete standard they can apply when they come across information in their daily lives: Is what this person’s saying based in actual good evidence, or is it just their opinion?

This, lately, is how I’ve been trying to introduce library research to students, and I think (and hope) that it gives students a context for why the library matters. Because, believe it or not, students do want to believe what’s accurate; they just need a guide to help them figure out the best way to apply in practice the intuitive empiricist epistemic standards they’ve been adhering to all along. 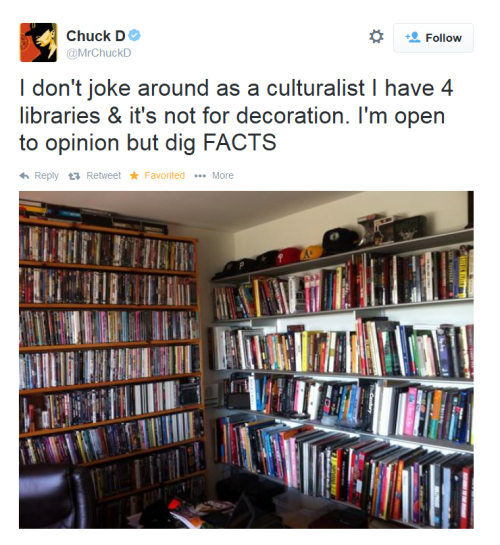 (Thanks to Alex Carroll for the Chuck D. pointer).

Filed under Education, Library Instruction, On Being Human, Posts by Kevin Michael Klipfel, The Library Game

One response to “Why Even Bother With the Library?”